“Write about cabbage” was the prompt for the writing assignment.  Though the word cabbage conjured up images of food, the subject didn’t “speak” to me. How about cabbage roses instead?  Specifically, the faded pink cabbage rose wallpaper in the room I called mine at my grandparents’ house – a red brick two-story built in 1918.  I suspect this was the original wallpaper.  Maybe it faded over time as the sun on the south side of the house streamed through the one large window.  A window covered by the old-fashioned roll-up shade at bedtime, but during the day the dotted Swiss sheer curtains were the only protection for the cabbage roses.

Remembering that room makes me feel the love that my grandparents surrounded me with when I spent time there. Something about a white chenille bedspread – with the chenille pattern running in horizontal waves across its width – brings back a sense of comfort.

Because my father was serving in the Army Air Corps at the end of WWII he was stationed far away when I was born.  My mother and I lived with the Galt grandparents during all his deployments.  I was born two blocks up from 40 Parker Street in a full-on snow storm. My mother and grandfather walked those blocks to Carlisle Memorial because the roads were impassable. 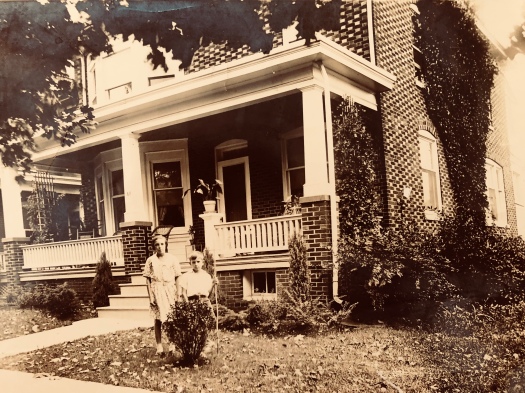 I was born during the Battle of the Bulge in January 1945.  While Carlisle Memorial was producing a small number of babies, the Battle of the Bulge killed over 19,000 Americans on the Western Front.  It turned out to be the second most lethal American battle and was the last major German campaign on the European front.  The “baby boom” came in the 1946-55 years when men returned from WWII.

My room – the cabbage rose room – was across the hall from the bathroom with the white porcelain claw-footed bathtub. I remember happy times as I splashed water onto the white hexagonal tiled floor and was never reprimanded by Marty, the chief bath-giver to me and my cousins.

Marty and her husband lived in the attic of 40 Parker.  This space was re-done to accommodate this middle-aged couple who had come on hard times and needed a place to live and needed employment.  They lived there in exchange for work they did around the house.  It was a special treat to be invited up the steps to make cookies with Marty.

Marty tended my mother during her post-partum days.  That was after she had already spent the usual (for that time) ten days in the hospital recovering from a normal childbirth.  Marty was as necessary to running that household as the regular delivery of coal in the winter.

When I was four or so Marty taught me how to roll bandages for the troops.  Strips torn from soft old sheets were destined to wrap wounds of soldiers injured in battle.

Cabbage rose wallpaper seems to have gone out of fashion by the time my grandparents built a new modern house in the early 1950’s.  Occasionally I’ll see a photo of a “retro” bedroom with that distinctive look and remember the comfort of that old house and “my” room.